Huh! Venezuela Will Not Participate In The Miss World 2017 Pageant? 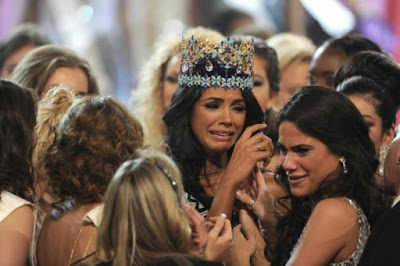 Awwww! Here is some bad news for all the Venezuelan fans of Miss World beauty pageant.


According to Exclusiva magazine, the Miss Venezuela Organization will not send a candidate in the 66-year-old pageant due to the country’s current socio-political and economic situation, making the francise fee more expensive for the organization.

“Venezuela will not participate in the Miss World 2017 beauty pageant, which will be held at the Beauty Crown Theater in Sanya, China, on Saturday, November 18. The Miss Venezuela Organization has already decided not to send any candidates to the international competition due, first, to the socio-political and financial crisis that is currently experienced in the country. But also because of the increase of the dollar value, the currency which is to be cancelled for the franchise currently valued at $20,000.”


Secondly, Within the Miss Venezuela Organization, there is a real belief that the last Venezuelan candidates [Diana Croce in 2016, Anyela Galante in 2015, Debora Menicuci in 2014 and Gabriela Ferrari in 2013] did not receive ‘the treatment they deserved’ because the president of the event, the British Julia Morley, maintains that Osmel Sousa gives less importance to Miss World than Miss Universe.), ”

If sources are to be believed, no Venezuelan representative will be sent this year to Miss World 2017 pageant.