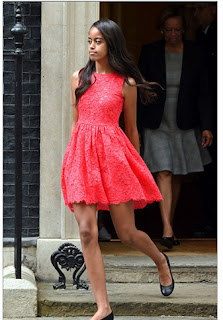 Malia Obama, the eldest daughter of former President Barack Obama, has reportedly turned down multiple offers to become a model because she prefers to stay out of the public eye.


The former First Daughter, who is now 18, is currently on an internship working for Hollywood producer Harvey Weinstein in New York City. Her assignments include reading scripts and pitching them to executives at the film production company.

Arguably as much of a style icon as her mother, the teen has been asked several times to model for the catwalk, but she has no interest whatsoever in being in the public eye.

'Malia has a model body that would be great for runways. She has been offered several opportunities to model but turned them all down. She wants to be behind the camera, not in front of it,
The 6’1” former first daughter is often spotted in printed dresses, cute overalls and statement-making coats — all of which sell out the minute she wears them.

Malia is more than six-feet tall and is reportedly obsessed with shows such as America's Next Top Model and Project Runway. Younger sister, Sasha can be seen, right

'She loves the film and TV business and loves reading scripts. She will leave the modeling to Kendall Jenner. As she has zero interest of being famous like her dad.'

Malia is believed to be planning to work in the film industry having also interned with the HBO show Girls in 2015.