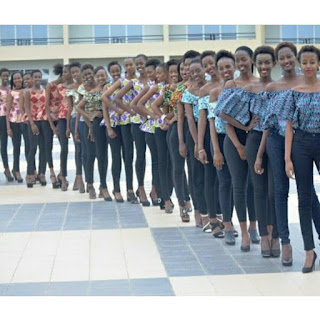 Saturday night at Remera petit stade Rwanda, the Miss Rwanda 2017 preselection took place and 15 finalists out of 26 contestants were selected for the grand finale of Miss Rwanda 2017
Different criteria were focused on in choosing 14 best. Those include: confidence on stage, validity and value of the answers; ability to catwalk and physical features. Generally, the questions that were asked were about the political and social state of Rwanda and others were personal. Below are the ladies who were given Pass and were able to receive gift baskets by Cogebanque. 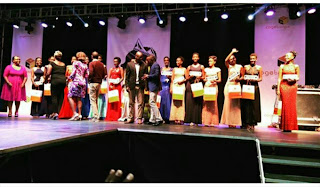 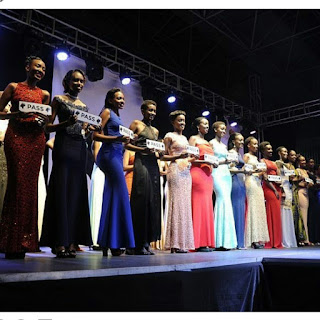 1. Mukashyaka Carine (Kigali City)
She was very confident on stage, answered questions clearly and has her mom as a role model.

2. Umutoni Pamela (Eastern Province)
She gave a good answer of what beauty which was good inside and outside..

3. Umutoniwase Linda (Western Province)
This is the winner of the popular vote which was up to 50,349 votes! Apart from being beautiful and looking nice a red dress, she also gave good satisfying answers.

4. Mutesi Nadia (Eastern Province, 19 years old)
She said that Rwanda’s biggest problem is poverty which can be solved by entrepreneurship. Even though not convincing enough, her self description was okay.

5. Umutoniwase Belinda (Southern Province, 21)
It has always been her dream to be in a Beauty Pageant since she was little.

6. Iradukunda Elsa (Western Province)
She believes that the Beauty pageant is good for women development and she smoothly stands for dignity, passion and self confidence.

7. Uwase Hirwa Honorine (Western Province, 20)
Through Judge Mike’s implication, she can speak French. Even though she didn’t, she is very good with words. She is proud to be Rwandan because of Rwanda’s security, hygiene, environment and President Kagame).

8. Umutoni Tracy Ford (Kigali City)
She had a lot of fans present and also her mom who encourages her is her role model.

9. Iribagiza Patience (Eastern Province)
She loves and cares for kids; and she knows by heart the core values of Rwandans and said them without stammering.

10. Umutesi Aisha (Southern Province, 21)
She is Miss Ruhango and very much deserves it. She is a volunteer who helps the youth in her province and she wants to study Political Science in College. How great is that!

11. Ashimwe Fiona Doreen
She is a former Law student in College. She writes for Muhorakeye Magazine which promotes girls. She sees the Beauty Pageant as an event that encourages self confidence and leadership skills that are important for tomorrow.

12. Umuhoza Simbi Fanique (Eastern Province, 18)
She demonstrated the importance of TVET as vocational schools that influence practical learning rather than theories, and this pushes youth to be job creators instead of being job seekers.

13. Shimwa Guelda (Western Province, 20)
She gave an incredible ancestory introduction. She promotes very much the government project called Made in Rwanda, and she would literally advise a foreign Business investor to invest in this because it will provide payment balance (more exports than imports in Rwanda) and solve unemployment problems. She is interested in made in Rwanda Fashion.

14. Mukunde Laurette (Northern Province)
She is an emotional young lady whose parents support her so much that she shed a few tears. She wants to be an interial designer. She entered the contest because she wanted to promote Rwandan girls and to expose her ideas to Rwanda. She believes that if Rwandan NGOs worked with the government, custome care services will be improved. If she is an interial designer, she plans to work with RDB to promote tourism.

She also gave a good ancestory introduction (described her dad, grand pa, great grand pa and so on). She is a big fan of culture and she is one of the main founders of Itorero in Lycee de Kigali, where she used to study. If she was appointed as the Minister of Sports and Culture, her first actions would be to form many culture clubs in schools and encourage yound kids to participate in sports.

The above 15 ladies will start boot camp on th 12th February. The next big thing will be the finals and crowning of Miss Rwanda 2017 on the 25th February.
Credit-akomanet

November 28, 2016
Miss Supranational 2016 is scheduled to be held on 2nd
December 2016 at the Spa Resort of Krynica- Zdrój, Poland.
Post a Comment
Continue reading »