February 25, 2017
The beautiful Lauriela Martins, 19, representing the province of Cabinda, was elected Miss Angola 2017, at a gala held at the Kilamba Multipurpose Pavilion in Luanda.


Lauriela Martins, a first year student, dept of Architecture, was chosen from 21 other candidates from the country's 17 provinces and four from the diaspora (Portugal, United Kingdom, Brazil and USA). As the winner, she is entitled to several prizes, among which a car, a laptop, 150 thousand kwanzas, a diamond ring, a clock, a make-up kit and a year of beauty spa services.

The beauty queen said that when she took the stage she did not think that she would be the chosen one, since she was among the very strong candidates. However, she believes that the judged distinguished her for being outstanding. 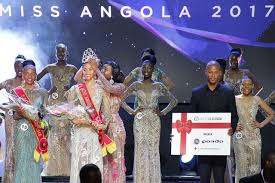 Lauriela Martins will work in favor of rural women, which is the continuity of her social project as Miss Cabinda 2016,
"I embraced the cause of the rural woman. It is with her that I have worked since the appointment for Miss Cabinda. I hope to continue with this purpose, not leaving aside the projects to be developed by the Mission, "said Lauriela Martins at a press conference following the appointment